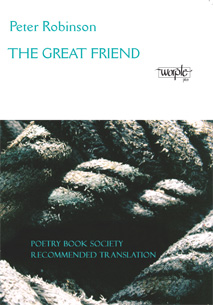 The Great Friend
by Peter Robinson


The Great Friend and Other Translated Poems was the Poetry Book Society Recommended Translation for Spring 2002. In the society’s bulletin, Douglas Dunn wrote ‘the range is eclectic without being scattered confusingly across too many languages and cultures. For me at least, much of this work is new. I imagine it will be for many other readers…such poems are interesting. They can wake you up to a diffierent kind of writing and saying, less hectoring, less public, more confidential and perhaps more neutral in its first person singular.’ Glyn Pursglove, reviewing the book in Acumen, found that ‘Robinson seems to take few liberties with his originals but his attempted fidelity is not allowed to distort his own use of English and English verse and there is a great deal to admire and enjoy here. Indeed, one could wish the book a good deal longer.’

“The Great Friend and Other Translated Poems brings together for the first time a choice of work in this field from the last quarter of a century. As the title underlines, these are not imitations or adaptations, but translations that remain faithful to their originals while, to the best of my abilities, becoming English poems in their own right. The main body of the book chronicles a long-time commitment to twentieth-century Italian poetry, including renderings of works by, among others, Campana, Ungaretti, Saba, Bertolucci, Sereni, Fortini, Guidacci, Spaziani, Erba, Zanzotto, Rosselli, and Raboni – but there are also selections from an early involvement with Pierre Reverdy’s poems, poems like ‘On Ten Fingers’, and more recent readings of Noriko Ibaragi and Ingeborg Bachmann.”


« Previous | The Verbals: Iain Sinclair in conversation with Kevin Jackson Bearings | Next »